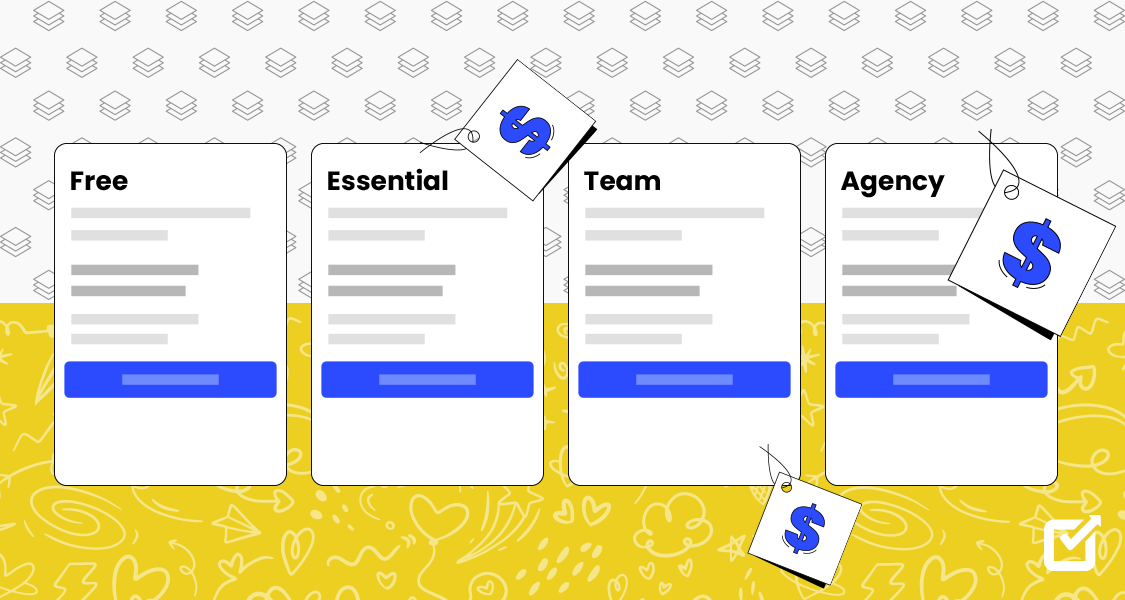 Back in 2010, Joel Gascoigne started working on an app for tweeting on Twitter. This was around the time when a free social media scheduler was a rare entity. However, before launching the product for the bigger market, he introduced a landing page instead. After the immense response from the users, he took exactly 7 weeks to bring out the prototype.

Three months later, they had the first 10,000 tweets posted from the platform. The next 10,000 took precisely 2 weeks more. This is how Buffer became the tool that it is right now. This version of Buffer was restricted and only allowed access to a few features.

However, that version of Buffer was far different from the one that we see right now. The UI was different, the tool did not support as many features as it does now, and the pricing plans cost much less.

Even though Buffer is one of the pioneers in the social media management field, many other tools have caught up to speed with the tool. These tools are not only doing better but also providing these services at a super affordable rate.

So, after years of work, there are entirely new Buffer pricing plans, and here is all you need to know about them!

Breaking Down the Buffer Pricing Model

The Old Buffer Pricing Plans vs. The New Ones

The plans look affordable at the first glance, but when you get into the details, that is where the actual devil lies. Buffer has broken down the pricing plans by social profiles.

Therefore, the extremely limited free plan only has 3 social profiles and lots of limitations. More on that later.

For now, we shall talk about the three major pricing plans.

The first paid plan is for $6 for ONE profile, which means that for each profile that you add, an additional payment of $6 will be made. So for 6 profiles, the plan will cost roughly $36, and for 8 profiles, it will go to an extremely high price of $48. Not to forget that there is only one team member for the plan, and there is no option to add an extra one.

The plan also has other limitations, such as not exporting reports or using any team management features.

The previous Buffer pricing model had the same Essential plan for $12, which was way lesser than the new one. 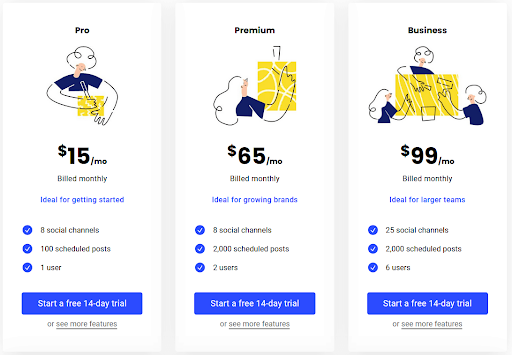 Similarly, the Team feature has one social profile for $12, and for each additional one, you pay an extra $12. So for 8 profiles, it will cost $96. However, you can invite as many team members as required.

A similar plan was previously for $65!

The last plan, known as the Agency, now has 10 profiles and unlimited users and costs $120. In the previous Buffer pricing plan, the same one cost around $99 and had a whopping total of 25 social profiles!

The new Buffer model is undoubtedly more expensive than the previous one. Also, it has much fewer social profiles and more limitations.

The second two plans have all features unlocked. However, they are still more on the steep side than competitors available in the market.

The free plan was a new addition to the Buffer pricing model, which we shall discuss next.

Another important thing to notice in the plans is the lack of network support. Buffer only supports Instagram, Facebook, Twitter, Pinterest, LinkedIn, and Shopify. If we make a fair comparison, the other tools will come out on top with more integrations.

The Free Plan at Buffer

The Buffer pricing model hosts a free plan as its first component. The free plan initially had much more to offer than it does now. It was tucked neatly beneath the paid ones and offered FIVE social profiles, 10 posts each, and one user.

However, it then went down to 3 social profiles and more limitations. It is safe to say that people were unhappy with it and took it to Twitter to show their annoyance. 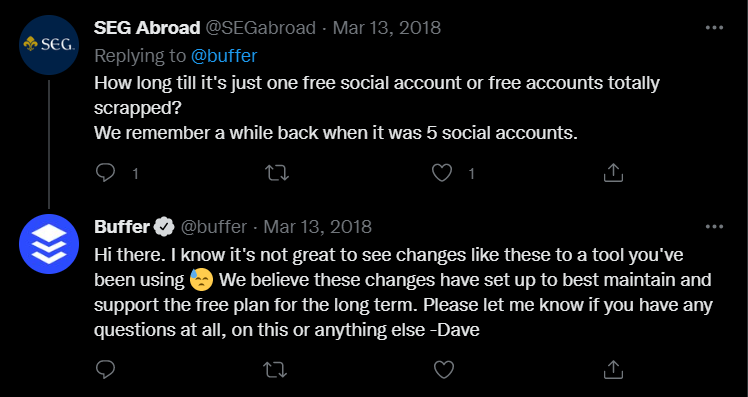 Buffer’s reply to the user’s appropriate query is more than mediocre. It does not handle the issue at hand and is weak. They are continuously justifying their limitations with the sad reason of having to retain their free plan in the long run.

In March 2018, Buffer again decided to make changes to its free plans, this time in terms of features instead of social profiles. Whereas the profiles stayed at 3, the free plan will no longer provide custom link shorteners, detailed analytics features, or even an option to add posts to the Queue. 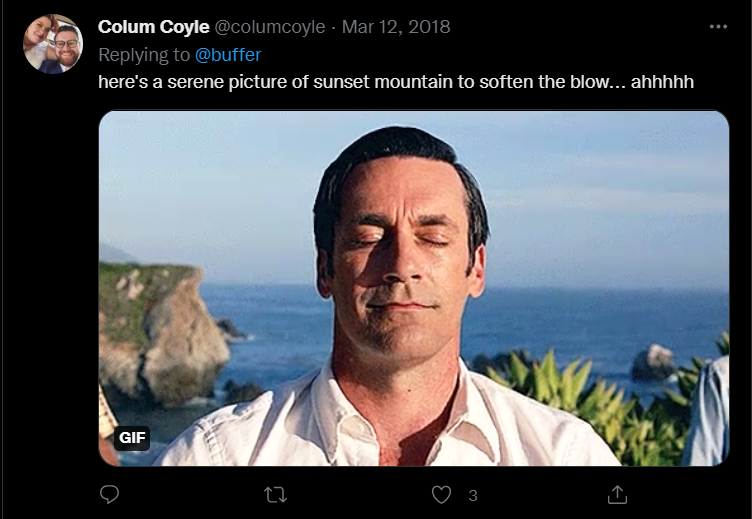 Another user called them out.

So are you wondering why exactly they did that?

Well, according to them, they have triple the number of free plan users compared to the paid ones. Therefore, to retain them, they have to put forward some restrictions. In their words, this would make it easier for them and the users.

This is why the free plan from the Buffer pricing model was revised.

Social Champ has a feature-rich, powerful free plan that can put any other to shame. With no features locked, you can fully automate your social media for as many as 3 social accounts. There is no restriction on post scheduling; therefore, it allows you to post unlimited posts across all three platforms. 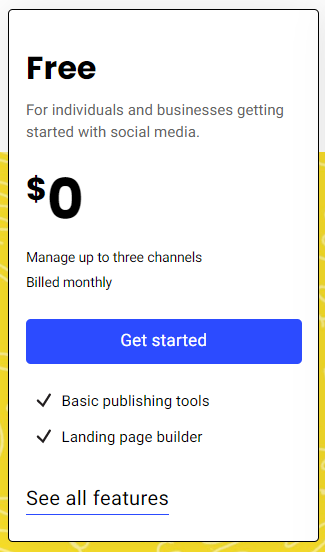 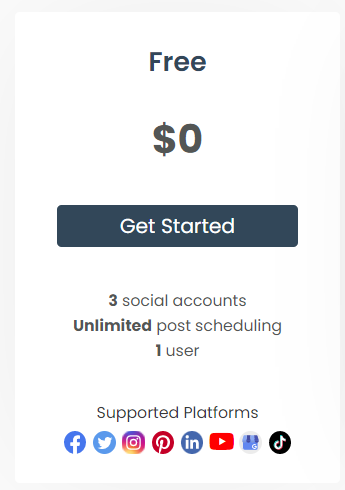 Let’s do a feature breakdown for the two plans:

Social Champ’s free plan is like no other in the market since it has next to no limitations and supports almost all features of the paid plans. Therefore, if you have only 3 social profiles, you don’t ever have to pay for a social media management tool.

You can sign up for the free plan on Social Champ and enjoy all the premium perks without entering your credit card details.

How Does Buffer Pricing Compare With Social Champ’s

Both Social Champ and Buffer have a total of four plans in their pricing structure. Three out of four are paid plans, and the last one is a free plan. We have already covered the free plan in the heading above, so let’s get to the paid ones! 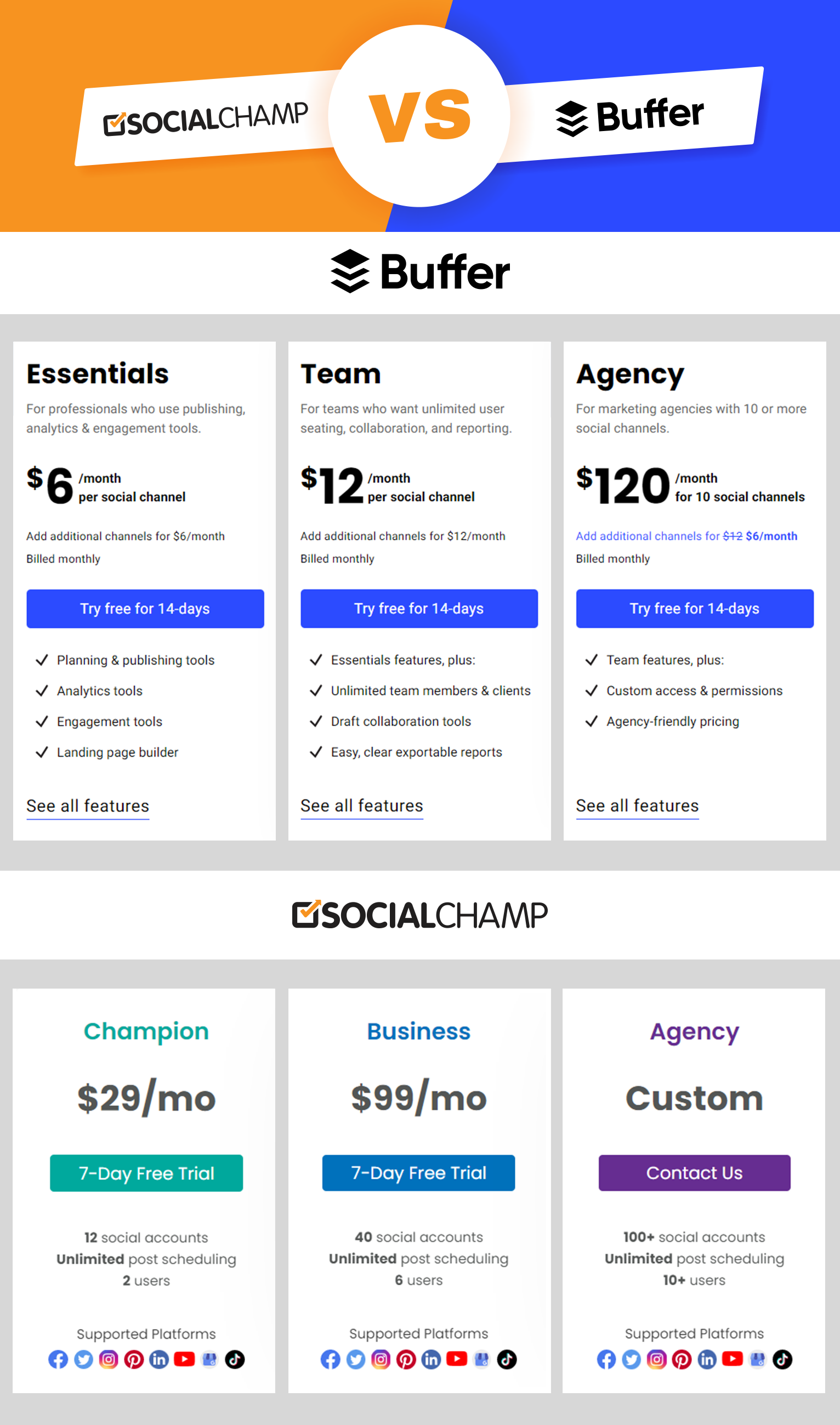 Okay, so the first paid plan is Champion and Essential for Social Champ & Buffer, respectively. The former offers the plan for $29 per month for 12 social profiles, 2 users, and unlimited scheduling. Buffer offers each profile for $6, equating to $72 for 12 profiles. The Essential plan has only 1 user, and there is absolutely no option to add an additional team member. However, you can add an extra team member for $6 in the Champion plan.

Moving on to the next plan, which is meant for bigger teams and small/medium-sized businesses. The plans are called Business and Team. Social Champ offers 40 social profiles, 6 users, and unlimited posting in this plan for $99. The Team plan has ONE profile for $12 per month, equating to $480.

The third plan from the Buffer pricing model and Social Champ’s is called Agency for both!

Social Champ has kept this plan for only those who handle big teams; therefore, the pricing is custom!

Book a demo with our customer representative or community team for a custom Agency solution for your business today!

All digital marketing tools are meant to simplify your life and provide automation features that save time. So a feature comparison between the two tools is super important here. Here are the top FOUR features that we will base our comparison on.

There are multiple other Buffer alternatives in the market that you should check out in 2022. All these tools provide much better value for money and have a more extensive feature pool than Buffer. Other than these two reasons, the following tools will also be easier on the pocket; well, at least some of them will be.

But, one thing is for sure these tools all have plans similar to the Buffer pricing model.

Even though there are many social media tools you can check out, here are our top 3 picks. 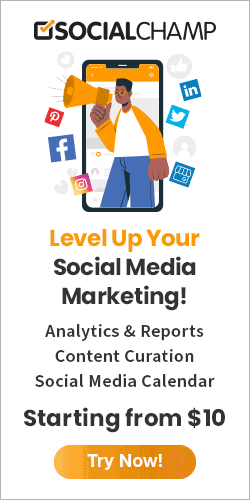 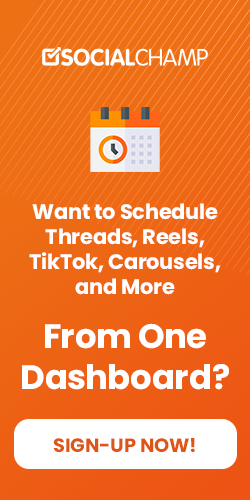 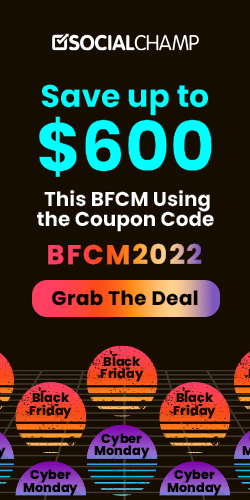 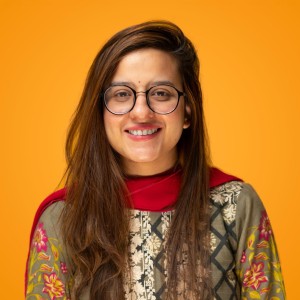 Part of the #ChampFam as a content writer who is always thinking about food. Besides being an online shopping enthusiast, I am also a huge fan of watching Netflix and consuming content on social profiles. I write about marketing, food, skincare, sports, and lifestyle! Reach out to me at [email protected] 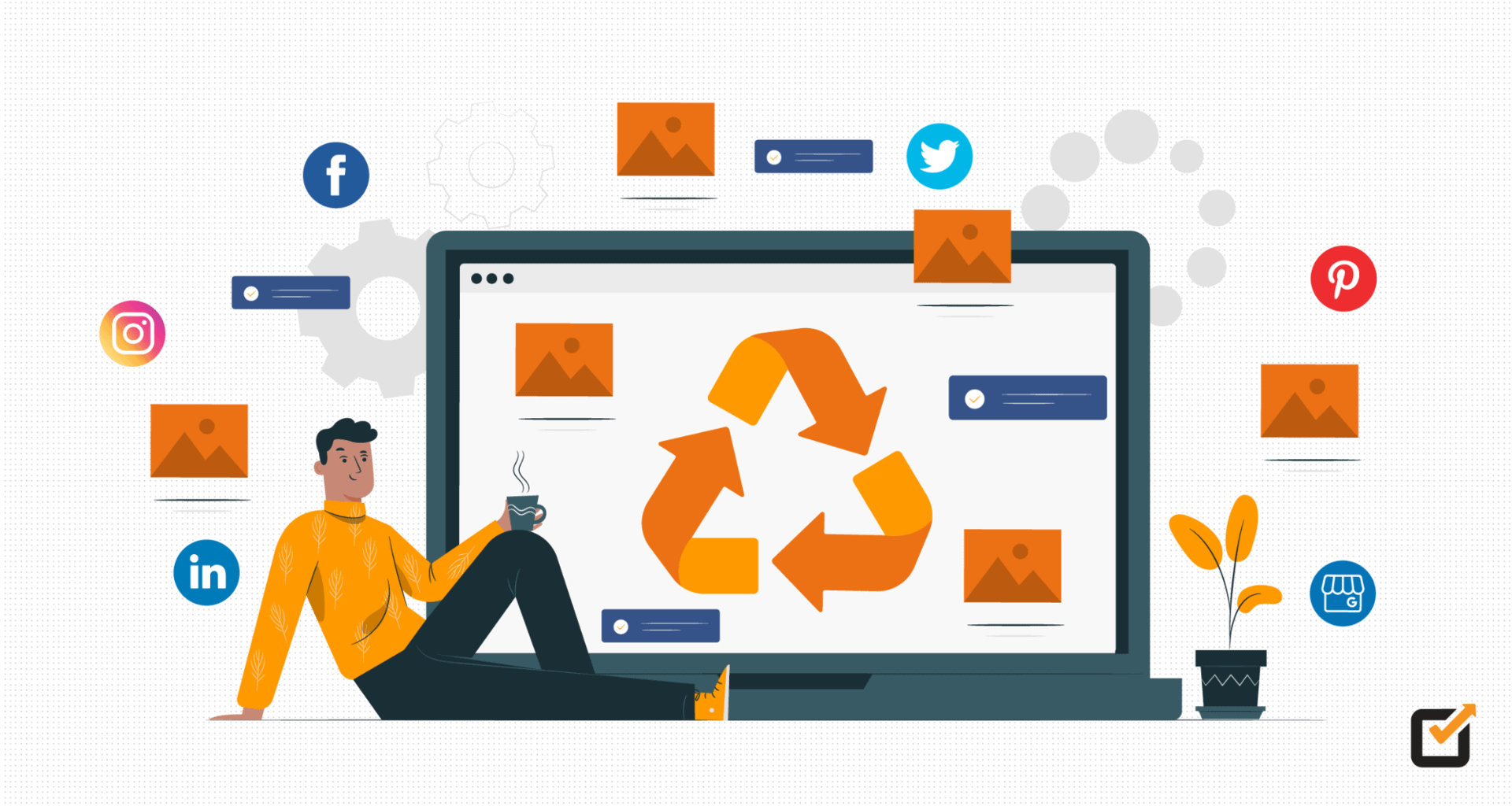 Why Repurposing Content Is Beneficial For Social Media Reach?

Quality content is one of the essential materials in digital marketing. You write something by giving full of your mind, interest, knowledge, and capabilities, and yes! It does 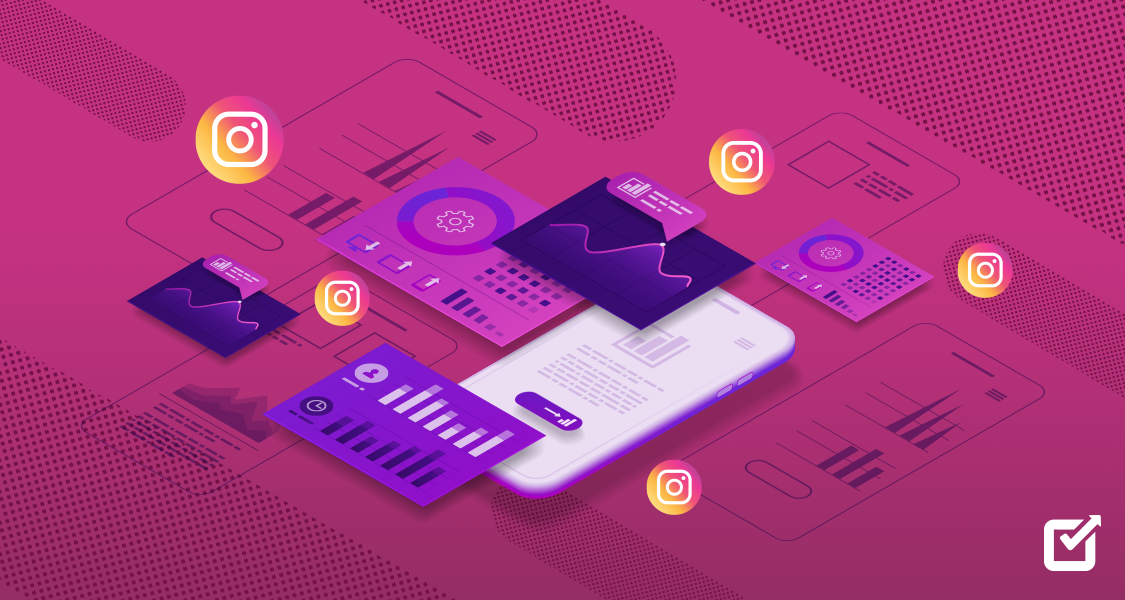 Over 1 billion people use Instagram globally and spend around 29 minutes daily on the platform. That’s quite a lot of time for brands to reach out to 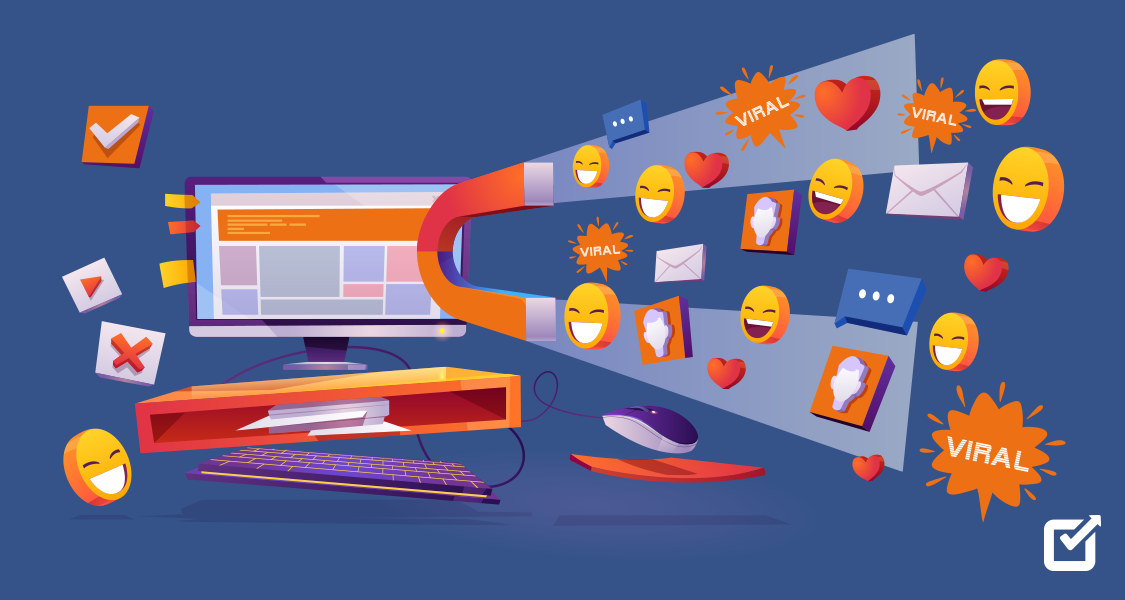 Viral Marketing: How to Go Viral on Social Media

Are you wondering why you are not getting enough followers on your social media? Or why your content is not getting the engagement you were hoping for? Brands