We are honored to have Cameron Craig on board for an interview. Cameron is a communications professionalist with 20+ years’ experience. He has worked with the giants of tech-industry namely Apple, Visa, PayPal, Polycom, eBay, and Yahoo. He has formerly worked as a tour specialist in Johnny Cash.  He’s one of the contributors at Harvard Business Review, Fortune, The Huffington Post and PR Daily and Business Insider.

In this interview, he has given advice to the youth and followers who are in to initiate business, how to maintain their PR strategies and tips to be successful. Learn the impact of Social Media Management Tool! Let’s start the interesting interview!

Social Champ: Hi Cameron, How are you? It’s an honor to have you here with the Social Champ. Tell us briefly how did you start your career as a communication specialist and how this led you to become such a renowned personality in the field of social media?

Moreover, what has been your motivation to become such an extraordinary social media influencer?

Cameron: I’m doing well. Thanks for inviting me to be here. I’ve always enjoyed writing. When I was a teenager in Sydney, Australia I wrote about music for teen pop magazines. Later I contributed articles as a freelancer for various pop culture publications and trade magazines. After I left high school I did an unpaid internship at a boutique PR firm in the entertainment industry which later led to a full-time job. I was at that firm for five years then traveled around North and Central America as a backpacker for a while.

Eventually, I resettled back in Sydney at Porter Novelli, a larger global PR agency where Apple was my client. From there I moved to Singapore where I worked in-house for Apple as their head of corporate communications for the Asia Pacific region. A few years later they transferred me to Apple HQ in Cupertino, California. After 10 years with Apple, I’ve since worked with a number of big tech companies including eBay, Yahoo!, PayPal, Visa, and Polycom. Along the way, I’ve built up my social media profile and connections.

Cameron: It builds a very personal connection between a customer and a brand. Consequently, it raises our expectations of brands. We love them when they do great things and are very vocal when they don’t.

Social Champ: How can promotional content play a vital role in drawing the attention of the right kind of audience to the message a brand is trying to signify?

Cameron: If it’s personal and authentic it can lure the audience in to find out more. If it beats the audience over the head with an overt sales message it will never work.

Social Champ: Communications specialists take on the responsibility of moderating communications throughout the corporations they serve. Describe how you use social media for corporate communications?

Cameron: My team at Polycom leverages social media various different ways for corporate communications. If there is a positive customer story or product review in a trade publication we use it to amplify the message and reach more people. We use it to poll our customers on their thoughts on remote working. We leverage it to communicate with media and influencers.

In fact, Twitter is great for that as it forces you to be very concise with your message and pitch. We also enable and encourage employees to get on social media and become authentic brand champions. You will see many photos of Polycom employees on social showing how they collaborate with remote teams through video conferencing. Some of them are really fun. The trick is to keep it light, genuine and conversational.  The most popular posts are inevitably ones with great images – Polycom products in popular movies and TV shows, video conferencing etiquette tips and a cartoon series we’ve done to name a few examples.

Social Champ: Working with prime companies like Apple, PayPal, eBay, Yahoo and much more, it must have been a great experience, is there any moment that you hold close and cherish? If so it would be gratifying to us if you share some memories or pictures.

Cameron: I started working with Apple just as Steve Jobs had returned to the company. Apple was going through a really rough few years and its future was uncertain. I know this is hard to believe now but it’s true. As Steve quickly got back in gear it felt like we were changing the world every three to four months with new product categories, and new ways of thinking about music, photography and film and the role of the computer in the home. They were incredibly exciting times and the world was stacked against us 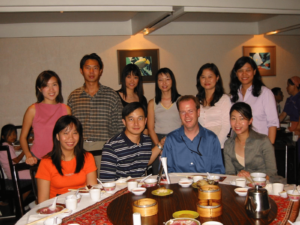 I have great memories of this photo. It was my farewell lunch in Singapore with Apple’s Asia Pacific marketing team just before I moved to the US to work at headquarters. They were an awesome team and I learned so much about different cultures in that role. My job kept me on the road traveling throughout the region: India, South Korea, Japan, Australia, Malaysia, Taiwan – so many places. When I was back in the Singapore office we’d go out for lunch every day at surrounding open-air food centers and have the most amazing food. 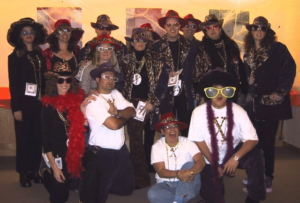 Apple’s HQ communications team were a fun bunch too. We worked really hard but we also liked to have fun. This shot was taken at our Halloween party.
The most important and special memory I have from my Apple time is when my parents traveled from Australia to our campus in California and saw where I worked. My boss and team were very kind to them and they were very proud.

On a different note, this photo was taken at Luxor, Egypt with Yahoo! Co-founder Jerry Yang. I led communications for Yahoo!’s emerging markets group after I left Apple. I was based in Singapore, again but our team’s scope included Latin America, the Middle East, South East Asia and Eastern Europe. It was another few intense years of being on the road a lot. But I learned so much about business, M&A and communicating internationally.

Related:Creative Ideas To Boost Your Marketing Efforts With Jason Falls

Social Champ: What are elements of interactive public relations for new businesses and startups?

Cameron: I recently wrote an article on this titled PR Advice for Startups: Slow Down.
Before you chase articles or build your social media followers get your message straight.
Your core message is just as important as your engineering framework. If you don’t build it right at the beginning, it will crumble to pieces later on.

Social Champ: Mentors are the lifelines for success. Who were, or are, your mentors who helped you reach where you are today?

Cameron: I’ve been fortunate to have worked with some great people over the years that I’ve learned a lot from. I learned a ton at that small boutique firm in Sydney back in the day about how to pitch media and land clients. I learned a ton from my Apple experience which I’ve written extensively on. You can find some of the stories on my website asignaturestory

Social Champ: What methods can you use for effective internal communications? Share some of your growth and marketing strategies?

Cameron: The wall between internal and external audiences has not just come down, it has imploded. It’s also clear that yesterday’s approach to high profile, better funded external communications teams and less resourced internal teams will not work. The successful communicator of 2017 must be well-rounded and employ strategies, channels, and audiences across both sides to build a company’s reputation. I just contributed a chapter to a terrific new book on internal communications. You can preview my chapter and download a free copy of the ebook.

Social Champ: Describe a time you were successful in delivering the company message to a target audience. What was the key to its success?

Cameron: I take great pride in delivering the co-founder of Polycom’s story to a wide audience. In my first few days at Polycom, I heard co-founder Jeff Rodman tell this story of how he founded the company to a bunch of 8 and 9-year-old kids at a bring your kids to work day. He bought a 95 cent book from RadioShack on building speakers that eventually led to the creation of the $2B successful 26-year old company.

The story had never been told to a larger audience after all of these years. We quickly took it to Wired, Harvard Business Review, Inc, and Entrepreneur. Jeff now has fans and followers in Silicon Valley and all over the world. In fact, just a few months ago he delivered a keynote address at StartUp Grind alongside the co-founders of What’s App, Waze, and Tinder. He’s proof that a great story always wins. 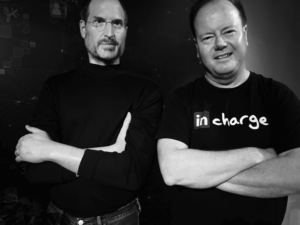 Social Champ: What are you working on right now that you’re really excited about?

Cameron: I’ve developed a keynote address on how communications played a key role in Apple’s turnaround. Public speaking is a relatively new thing for me so it has been an exciting project.  I’ve road tested it in Sydney and New York at a couple of marketing conferences and am about to deliver keynotes in Boston at the PRSA Global Conference October 8-10 and the Asia Pacific Communications Summit in Hong Kong November 15-16. If any readers want me to speak at their conference please contact me through my website at asignaturestory.com

Thank you so much, Cameron Craig, Social Champ wishes you all the best in your future endeavors. Thanks for enlightening the audience with Marketing Efforts which include PR and Branding Strategies. 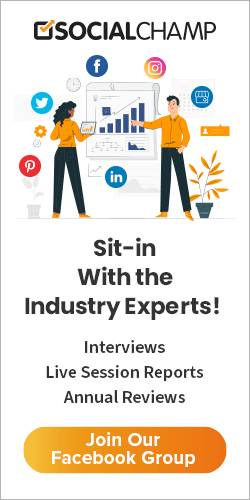 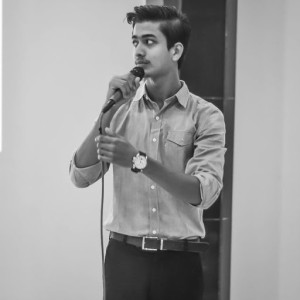 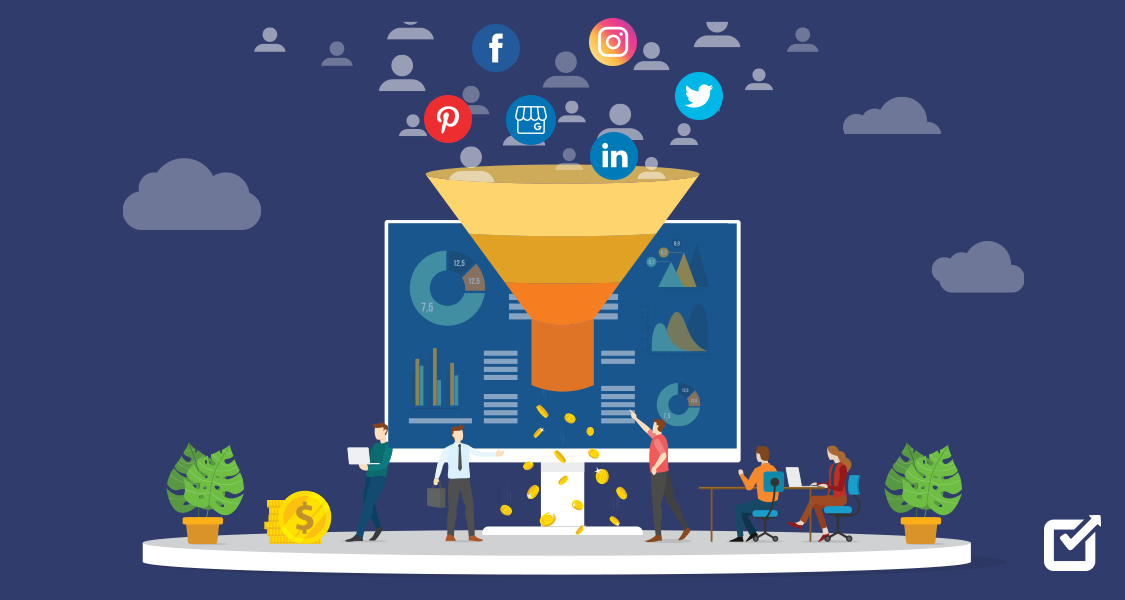 5 Stages of Social Media Marketing Funnel: Everything You Need To Know

Content is the best way to connect with your target audience to build trust. You can use social media to create informative or entertaining content in blogs, videos,